So The cube often pops up in the ugly car league tables, unjustly our readers would have it I think, but the winner is almost always the fiat multipla. In our final history of the cube article we see how bizarrely, like some common ancestor of Apes and Man (ok it took 9 years not 7 million but things happen faster since the industrial revolution!) the cube and multipla could be said to be distant cousins…

So in the last article we signed off with the fact that the bit that left most auto journalists scratching their heads about the chappo was it’s name. Odd japanese meaning, bad translation of something, acronym? Nope none of the above, it was actually just a homage to what had gone before…

Yup, this is where it all began back in 1989 at the Tokyo auto show! Now I love the cube, in fact I love almost all of the quirky japanese box cars. If I’m really being honest if I won the lottery one of my first car buys would be a Daihatsu Mira walkthrough! 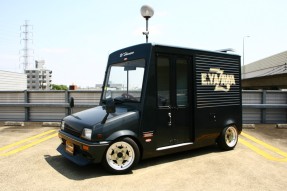 Buuuut that is a truly ugly car!

Now 1989 was a long time ago, I was ten, the super nintendo wouldn’t be released for another year and Bros, Big Fun and Jason Donovan were topping the charts so there isn’t a lot of information around to be had about this car as what was published was on paper and hasn’t made it into even the fluff filled back corner of the storage unit of the internet! What I have seen though is that at the time it was described as a posh phone booth (for those under 30 phone booths were a box on the street that used to have phones in for use before mobiles, you still see them now although they are now used as urinal for tramps or adult services advertising locations!) and I can kind of see that. there is a lot of glass going on there and that reddish colour is sort of like the telephone boxes in London at the time but it’s a stretch.

You can see cube features taking shape like the stumpy fins on mudskippers showing a future evolution posibility. That windscreen that wraps into the front window and it’s rounded corners at the B pillar. The rear lights being a continuation of the rear door glass and creaping round ever so close to the rear window and showing the posibiltity of a future connection and of course that distinctive box shape!

That front door is a crazy thing though and whilst the square headlights show a leaning to the future the regular sloping bonnet doesn’t sit right. The cube often catches the nickname pope mobile (usually the white ones at least) but look at that rear window! I swear the designers had been enamoured by the popes visit to japan in 1981 and had been looking for the chance to impress!

The oddness didn’t stop on the outside though, inside it was kitted out a lot like a van. Rather than a van’s bare metal interior though the chapeau has a full fitted interior and even vinyl on the floor despite it’s temporary passenger seat. 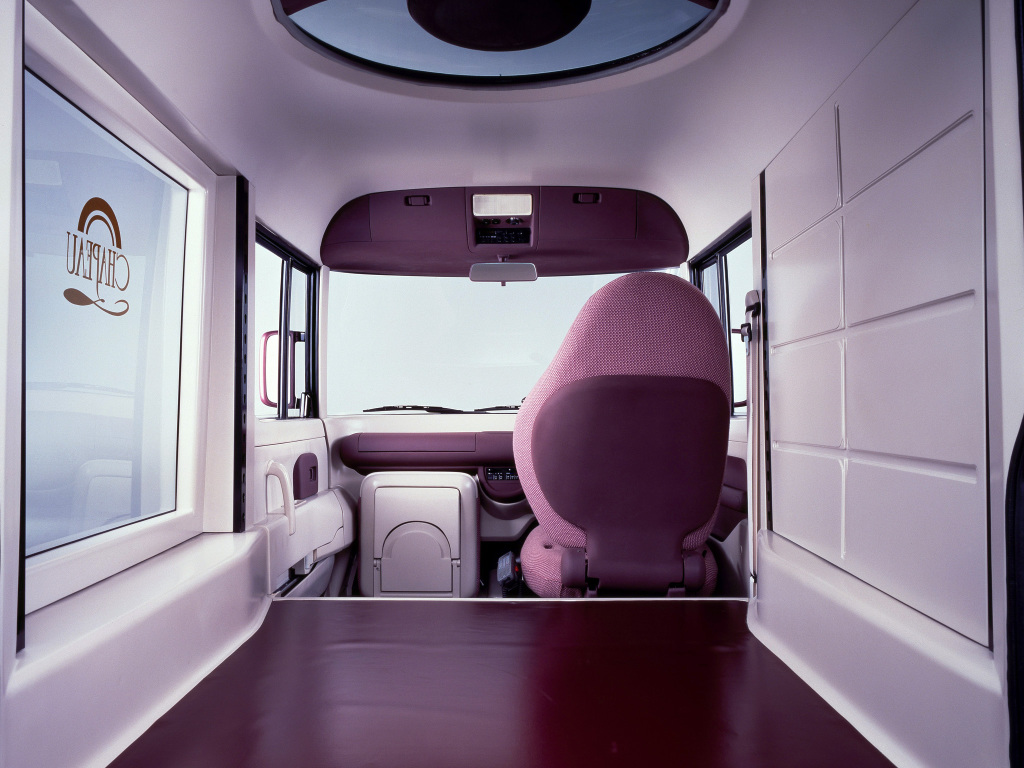 It can’t be denied it’s a flexible interior and I wonder if the side panels opened for all sorts of other possibilities. That big glass roof is already there as well and whilst it’s round you can see the intention is there for the Chappo and the Gen 3.

Check out that car phone!

I can’t say I fully understand the colour choice if I’m honest! the red’s in the Conran edition some 20 years later were about showing flair and passion inside a subdued shell but those seats look like something you’d find in a cheap meeting room or the ‘nice’ chairs the school gets out for the parents!

I do like the dashboard though, its simplicity is to be praised in our time of the thousand button ford dashboard and those satnav/stereo screens that always look lkike an afterthought add on even in luxury cars.

The gear selector definitely came from the parts bin as a colour coded handle couldn’t have been too much of stretch could it? The rest, a group of clean lines and minimalism you would expect from japanese design and it looks like the requisite glove box, sunglasses holder and GIANT japanese ashtray! The steering wheel suggest that Nissan had their eyes on a european partnership early as although it would be another 10 years before they formed the Nissan-Renault-Mitsubishi alliance in 1999 that steering wheel screams citroen (or Aston Martin Lagonda another of the boxiest cars ever built!) but the oval centre hub looks almost identical in shape to the hub in the centre of my Gen 3 wheel.

So we come to the end of our walk down memory lane (to be fair after finding this Coelacanth of a descendant do you blame us for stopping!) and what a trip it’s been. Hopefully we’ll get to see another 20 years of cube development in the future and maybe the Chappo’s entertainment centre interior will come back with the advent of self driving cars!

We’d love to hear your thoughts on the history of the cube and even what elements of the Chapeau you can see in modern cars (those rear lights say kia soul to me!) so drop a comment down below.

All the images have been pulled from various web sources and no copyright is claimed. Images are used within these articles under a fair use for comment base.