This week sees our first guest piece from the Cube Club Queensland. Many thanks to Lynn for the write up and pictures of the groups trip to Byron Bay. So lets find out what they got up to…

After meeting up in Brisbane the convoy headed south to pick up we Gold Coasters before cruising South to Byron Bay.

visitors than any other spot in Byron. We knew we had to try and get the Cubes photographed up there… I think this is probably the most cubes in a line ever up at the lighthouse… 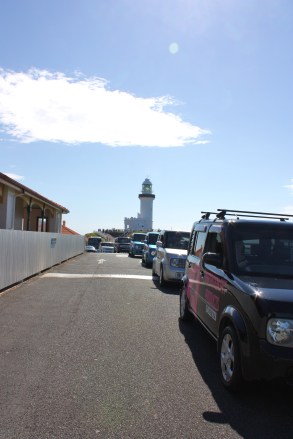 After cruising the streets of Byron Bay for a while and turning the heads of many locals, lunch was in order., where many stories ideas and all things Cube related were chatted about.

The Boys and their toys on Byron Bay Beachfront

With a storm blowing in we decided to make for home… The M1 highway makes for some great driving and was the perfect setting for some fun and photos on the way home…. 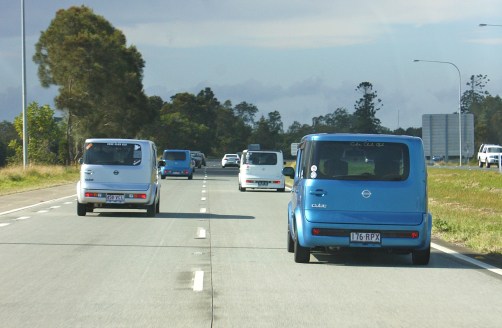 All in all another great Cube run by the Nissan Cube Club QLD… Great fun, great company, good food and of course … Wicked Cubes!!!

Thanks again to Lynn for the write up! Hopefully we’ll be bringing you contributions from around the world of cube and all those that contribute we’ll be sending an exclusive contributors sticker (as yet to be designed but aiming for something special!) and if funds and shipping regulations allow a bit of a goodie pack as well. So if you’ve been on a trip, done some interesting mods or have another idea for an article you want to throw in the ring drop us a line or comment below and we’ll get in touch!

3 thoughts on “Boxes in Byron Bay”