For the 3rd of our feature cars I’ve gone to a car that in the relatively short time the owner has had it has changed its look almost as much as Shane’s in our last feature!

This time we feature Scott Pickles and see what brought him to the cube and what he’s done with it since he got his hands on it!

Anyone who has attended a show or been around the facebook group is sure to have come across Scott at some point. Leading the way on the Gen 3 Uk modding charge his car has been developing ever since he bought it. Coming to the cube about the same time as I did unlike my route through other JDM goodness it turns out that the cube is Scott’s first car! He came to it from motorbikes which started out as a way of getting on the road as soon as possible and then a way of building a no claims bonus for when jumping to cars and the massive insurance bills that come with those as a young driver. So from Scooter to Harley Davidson Sportster (there seems to be a theme with cube owners not going for run of the mill vehicles forming) via a mishmash of various 2 wheeled transport he came to the cube.

When picking out his cube Scott got to a point of choosing between 2 specs and opted for the Kaizen over the LDN as it had the reversing camera but mainly as the colour of the one he found was so rare. The Sapphire Black is striking in person and is a stark difference to the white, silver or gun metal that is usually seen in the UK. Once the car was his there was no hanging about as not liking the characteristic roll of the cube the first mod was to fit a set of BC racing coilovers with 1.2 degrees of negative camber and 0.18 toe in. Scott describes the ride as like a Go-kart but without the power! 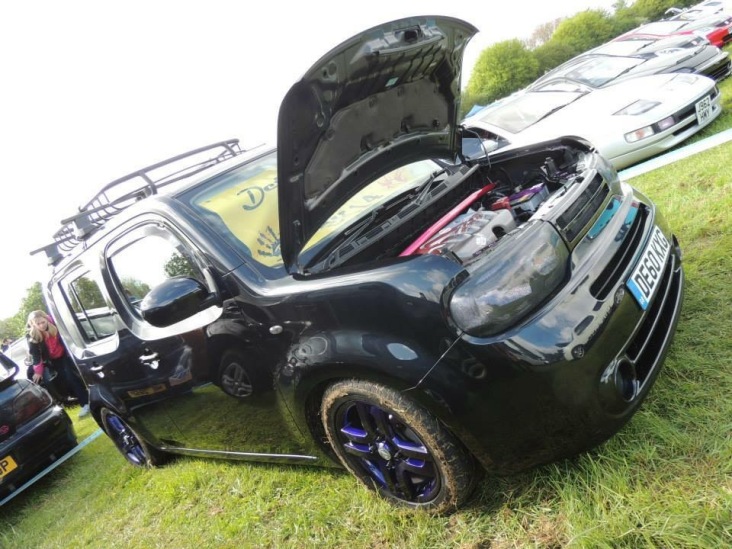 Following getting the ride right Scott needed to get the car looking right and deciding that the stock silver wheels didn’t look the part he had those refinished in deep purple which suited the car far better. Around this time Jeff an American member started to part out his cube for sale. I got some gas struts from him for the bonnet but Scott went to town. Jeff being in the states had collected a fair amount of rare parts for his cube that Scott snapped up, the original ATI grille now much copied but now incredibly hard to find changed the look of the nose. Inside the engine bay a tanabe strut brace was added to tighten up the ride a touch more but the cream of the crop is the engine cover from the American version engine that was airbrushed for the SEMA car show in Vegas for Bean Garage and Forjwoks 2010 show cars in 2010.

This was all show and Scott wanted some go so he also picked up a stillen intake from Jeff, a part we don’t get over here in the uk and when combined with a custom 2 ¾” stainless cat back exhaust system the HR16 breathed far easier! Rather than use the standard connections on the system Scott had unique exhausts cut the oem pipe right behind the catalytic converter and run the new system from there. This gives the car a much better flow whilst also dropping weight over the oem system.

Those of us that have stainless system to replace the oem pipe when it fails know that they are a little louder than stock. Whilst Scott doesn’t mind the noise I have a sneaking suspicion it played a small part in now being the time Scott looked to upgrade his audio system! Scott started out by adding a JL Audio JX600.1 Amp to drive a 8” DC Audio sub in a custom box. The sub however bit the dust after a couple of months (told you those exhausts could be loud!) and was replaced with 2 JL audio 12” Subs in the JL box! Scott didn’t change the stock system beond that as the head unit is fairly good as standard with the Nav and reverse camera and is actually unbranded Clarion with the speakers being unbranded JL components.

Many of you will have seen that this originally black cube has been a gorgeous shade of purple for a little while. Scott had the whole car plasti-dipped. A choice led equal parts by price and colour as the colour was custom made for Scott and the whole job done in 6 hours and for 1/3 of the cheapest price of vinyl. No mean feet when completely changing the colour of the car! The dip ultimately bit the dust on a particularly harsh trip back from a car show and Scott says whilst he did look after it ultimately driving the car like a go kart took its toll, the whole lot was peeled off (surely the ultimate for those that love peeling after sunburn!) and it’s back to black for the winter.

The biggest mod for the cube so far has to be the Hydro suspension, the only one in the world and custom built by Rayvern Hydraulics. Ray used to be stateside and specialise in minitrucks but brought his craft back to the uk and corner the market. The BC coilovers were sacrificed to make the struts for the front whilst the rears were custom built from scratch. This was done to allow Scott to have pillow top mounts on the rear giving the option of camber adjustment rather than having to shim. The only real modifications to the cars body to get it all working was to the front arch liners and this was only minor. The bonus of the hydro kit compared to air is the oil is always in the system meaning no waiting for air pressure to build in a tank and a far quicker reaction when adjusted. The first outingfor the Hydro cube was for an online segment for Fast car (oh the irony!) following Scott discussing his plans at an early stage with the team there.

Scott has big plans for the car this year despite having just become a Father. Another colour change, new wheels and adding 6 way control to the suspension so as the wheels can be individually controlled are all on the cards but lots of what he has planned is top secret. We’ll bring you more as we hear of it and things are unveiled so watch this space!

If you have seen a cube you’d like me to try and feature here or if you’ve added your own touch of personality to your cube leave a note below and it may be the next car to grace our pages!