So in a new feature for the web page we’re going to start looking at some owners cars in detail and what brought them to the boxy family. Did they resist or jump in with both feet? Have they a history of standing out from the crowd? Are they a die hard stock fan or do their veins flow with rice and neon? First under the Microscope is our co-contributor Pinion. 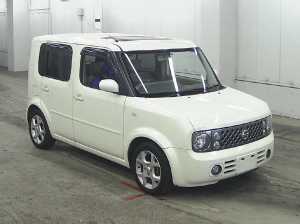 so what bought you to cubelife and what did you come from ?

Well I had a Mercedes 190 for a while and wanted something a bit more practical so while searching ebay i came across the cubes. I liked them but thought no there a bit too slow so I found a Subaru legacy gtb. However, after about 18 months I came to the conclusion that I would either kill myself or lose my licence so it had to go! (as an aside Mighty Car Mods have just built an 11 second car out of a Legacy-TH) I looked at more cubes on ebay but settled for a v8 discovery (it was cheap) 18 more months on a small fortune in fuel and that had to go so i finally took the plunge and bought the cube.

which gen and variant do you own and what had you choose that over any others you looked at ?

I have a 2005 gen2 yzll with a hr15de engine, it also has the higher spec beigetastic interior and rare sunroof! I test drove a silver cubic in east london just to try one out but the guy used it to ferry his many offspring around so it was a bit tatty, I went down to Bristol to see Neil at c.i.d. and chose one he had just bought at auction, the wait was painful though!

what modifications have you made to it so far ?

C.i.d fitted a £100 Chinese satnav hifi ,still works though so can’t complain I fitted a small pioneer sub in the storage compartment behind the drivers seat

what plans do you have for the car for the future :-

I plan to sound proof it before I fit a better bit of i.c.e. and to keep some of the noise of the exhaust out. I would also like to look at fitting disc brakes to the rear and maybe fit an induction kit.

I have never kept a car for so long, it’s so much fun to own and quite nice to whiz along in down the country lanes with the upgraded suspension and who doesn’t like being stared and pointed at in the street ha ha!

So there we have it, Pinion kicks off our feature cars articles and gives everyone a bit more background on who your authors are and what led us to this bizarre square world! If you spot him out and about give him a wave.

Down the line we hope to bring you more owners cars, so if you’ve seen a cube who’s owner you’d like us to try and set our inquisition on let us know!